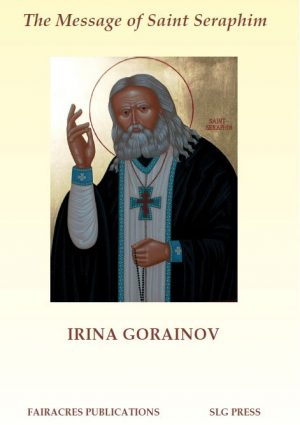 The Message of Saint Seraphim

This book focuses on Nicolas Motovilov’s record of a conversation with St Seraphim in 1831, soon after he was cured of paralysis by the saint.

PROKHOR MOCHNIN, later to be known as St Seraphim of Sarov, was born in July 1759 in Kursk on the northernmost Russian steppes. At nineteen, he entered a remote monastery in a forest in Sarov in central Russia, where he received the name Seraphim (Hebrew: ‘flaming’) and became a priest. He later lived as a hermit in a simple cabin in the woods, where he kept strict silence. He eventually returned to his monastery, where he shut himself in his cell for five years. After he had emerged, people flocked to see this staretz, who radiated the fruits of the Spirit. His dictum, ‘have peace in your heart, and thousands around you will be saved’ is well-known throughout the Christian world. He taught that the aim of Christian life is the acquisition of the Holy Spirit, and that prayer, more than anything else, gives the grace of the Holy Spirit.

This small book concentrates upon a record made by Nicolas Motovilov of a conversation with St Seraphim in 1831, soon after Seraphim had healed him of paralysis. The record was discovered in 1902 by Serge Nilus at the convent of Diveyevo and he had it published in the Moscow Journal of July 1903, the same month in which Seraphim was canonized.

IRINA GORAINOV lived for some years on the island of Patmos. Her writing is based upon both knowledge of the written sources about St Seraphim and upon personal acquaintance with people living in the same tradition of prayer and faith.

Irina Gorainov lived for some years on the island of Patmos. Her writing draws on both the written sources about St Seraphim and her personal acquaintance with people in the same prayer and faith tradition.