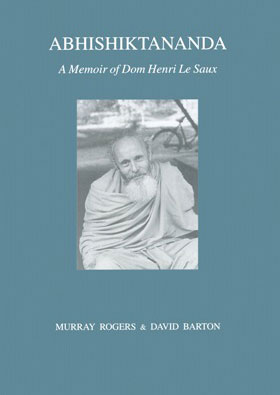 Memoir of a French Benedictine who made his home in India and believed that inter-faith understanding was best furthered at the deeper levels of prayer. A conversation with Murray Rogers and extracts from Abhishiktananda’s written work are included.

Dom Henri Le Saux (1910-73), the Benedictine monk who became known as Abhishiktananda, was a pioneer in inter-faith relations, a French Roman Catholic entirely at home in Hindu India. He believed that mutual recognition and understanding were best furthered at the deeper levels of contemplative prayer, where people of different traditions and beliefs can find common ground from which to enter into dialogue. David Barton’s biographical introduction leads into a conversation with Murray Rogers, whose personal memories of Abhishiktananda bring to life a man of exceptional dedication and vitality. The book also contains edited extracts from Abhishiktananda’s written work.

Murray Rogers (1917-2006), a life-long disciple of Ghandi and pioneer of interfaith encounter, was ordained as an Anglican priest in 1940. He went to India in 1945, where he founded the Jyotiniketan Ashram in Uttar Pradesh. In 1971 he responded to a call to move to Jerusalem and open an interfaith centre. He moved to an interfaith centre in Hong Kong in 1980, and on to Canada in 1989. He returned to England in 1998, making his home in Oxford.