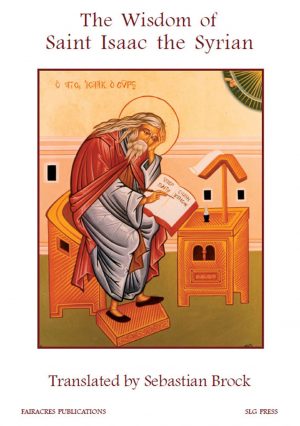 The Wisdom of Saint Isaac the Syrian

A selection of short sayings from St Isaac the Syrian, a seventh-century master of the ascetic life, each holding a spiritual truth.

In recent decades there has been a notable renewal of interest in St Isaac the Syrian, a seventh-century master of the ascetic life. This selection of short sayings is part of Dr Brock’s work on a fuller, long-neglected manuscript which he is making available to English readers. Each sentence holds the mind steadily in the light of a truth about the spiritual life. St Isaac’s vivid images drawn directly from nature, husbandry and general human experience speak for themselves and draw us to penitence and prayer.

Saint Isaac the Syrian (Saint Isaac of Nineveh) was born in the early seventh century in the region of Qatar or Bahrain, on the western shore of the Persian Gulf. He and his brother entered a monastery when young, and Isaac gained there considerable renown as a teacher. He was consecrated Bishop of Nineveh, retiring five months later to join the anchorites in the wilderness of Mount Matout. He lived there in solitude for many years, until forced through blindness and old age to retire to the monastery of Rabban Shabur, where in c. 700 he died and was buried. He is remembered for his 91 spiritual homilies on the inner life.